Two inspirational women have been recognised for their work within the local community by having the New River Bridge and Woollens Brook Footbridge named after them.

The Claire Bayless Bridge and the Debbie Pezzani Footbridge were officially named at a special event on Monday (27 September) at Essex Road, Hoddesdon.

The £10m project opened in March to boost access to the town’s business park, which plays a significant role in providing local jobs and supporting the local economy. It was supported by an £8.9m Local Growth Fund investment from Hertfordshire LEP, £1.47m from Hertfordshire County Council, and £400,000 of S106 funding from Broxbourne Borough Council.

In June, residents, community groups, businesses and schools were invited to nominate a community figure or local hero to name the bridge and footbridge in their honour. Over 40 entries were received, and a judging panel formed of members of Hertfordshire County Council, Hertfordshire Local Enterprise Partnership, Broxbourne Borough Council, Hertfordshire Mercury and Osborne, the building contractor, unanimously agreed on Claire and Debbie as their winners.

Sir Charles Walker, MP for Broxbourne, and Cllr David Taylor, Mayor of Broxbourne, unveiled the winners on site joined by 50 partners of the project and key stakeholders from across the community, including Love Hoddesdon and St Catherine’s Church of England Primary School.

Claire was nominated for the immense support she has provided to her local community during the pandemic. Claire works at Morrison’s, Hoddesdon and is the supermarket’s community champion. She was recognised for her continued support going above and beyond in her role to help schools, care homes and families who have fallen under difficult times during the COVID-19 pandemic. She has helped with numerous fundraising projects and is also an active member of the Love Hoddesdon Committee. Claire is also a Hertfordshire LEP Enterprise Adviser at John Warner School in Hoddesdon.

Claire Bayless, Community Champion, Morrison’s, said: ‘‘It’s such a huge honour to be recognised by my local community in this way. To have the New River Bridge named after me is quite overwhelming and makes me feel incredibly proud.

‘’My work as community champion at Morrison’s relies on the support from both my amazing colleagues in store and the Love Hoddesdon BID team. Without them I wouldn’t be able to help so many in our community.

‘’Finally, I would like to thank everyone that nominated me in this competition.’’

Debbie grew up in and around Broxbourne and co-founded the cancer charity Teens Unite in 2007. Since the start of the first lockdown, more than 1,000 young people who are fighting cancer and its long-term effects have taken part in one of almost 200 online activities that Debbie and the charity has hosted. The charity connects young people, helps to develop social support networks and builds a community of young people who are linked by a common experience, facing a life-threatening illness in their teenage years.

Cllr Phil Bibby, Executive Member for Highways and Transport, Hertfordshire County Council, said: ‘’The new bridge and footbridge are examples of the important infrastructure we need to be investing in to support our local economy. The scheme has also significantly improved walking and cycling, recognising the County Council’s ongoing commitment to cleaner, greener and more sustainable travel and its associated benefits for public health and the environment.

‘’On behalf of Hertfordshire County Council, I’d like to congratulate Claire and Debbie.’’

Richard Whitehead, Board Member, Hertfordshire Local Enterprise Partnership said: ‘’The importance of partnership and collaboration on this project cannot be overstated. It needed substantial additional funding to bring the business case to life and I’m delighted that the Hertfordshire LEP were able to secure the vast majority of the funding, bringing the scheme to fruition.

‘’Most importantly, congratulations to our worthy winners Claire and Debbie.’’

Cllr Lewis Cocking, Leader Broxbourne Borough Council said: ‘’Broxbourne Borough Council has actively supported the creation of a new access route into the business park, and I am delighted that the new and innovative bridge is now open for use. The improved access to the park will encourage new businesses to set up here, creating more jobs and better prospects for the Borough, and will allow existing businesses to grow and thrive.

‘’Claire and Debbie are both wonderful examples of our local community and fully deserve their recognition.’’

John Dowsett, Chief Executive Officer, Osborne said: ‘’I would like to thank all involved on this project, which has been an example of how contractors, designers and clients can work together in a highly collaborative manner to reach mutual goals. Despite the challenges of the last 18 months, I’m delighted that the project was completed on time and on budget.

‘’It’s a privilege that that the bridge and footbridge will be named after Claire and Debbie.’’

The importance of partnership and collaboration on this project cannot be overstated. It needed substantial additional funding to bring the business case to life and I’m delighted that the Hertfordshire LEP were able to secure the vast majority of the funding, bringing the scheme to fruition. Most importantly, congratulations to our worthy winners Claire and Debbie. 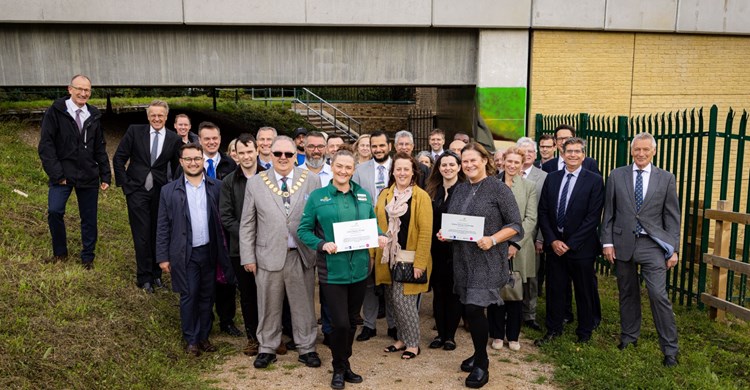 Dignitaries celebrate the opening of the bridges 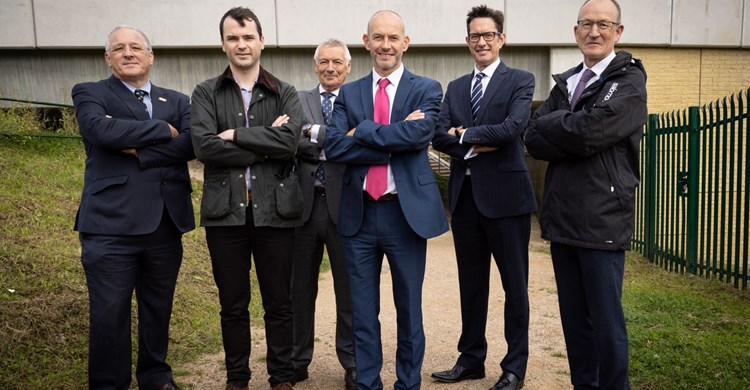 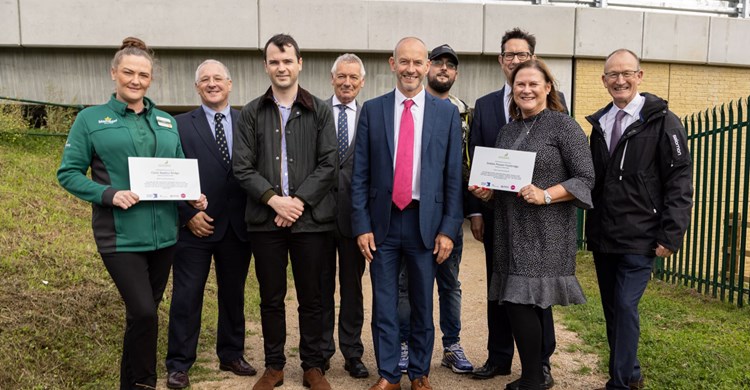 Local stakeholders with Claire and Debbie 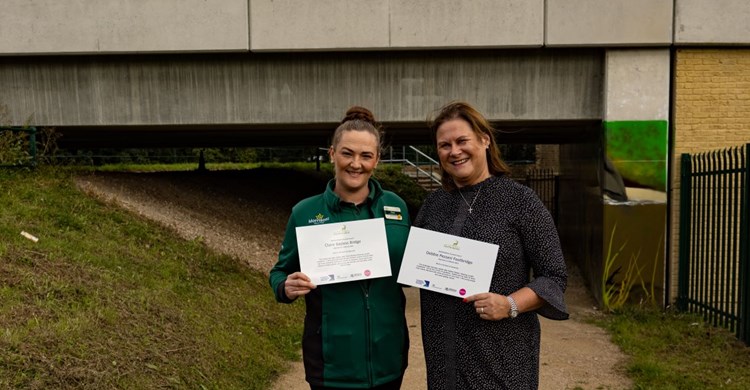 Claire Bayless and Debbie Pezzani at the bridge named in their honour
LEP Board member Richard Whitehead speaks at the event
Claire Bayliss and Sir Charles Walker, MP for Broxbourne 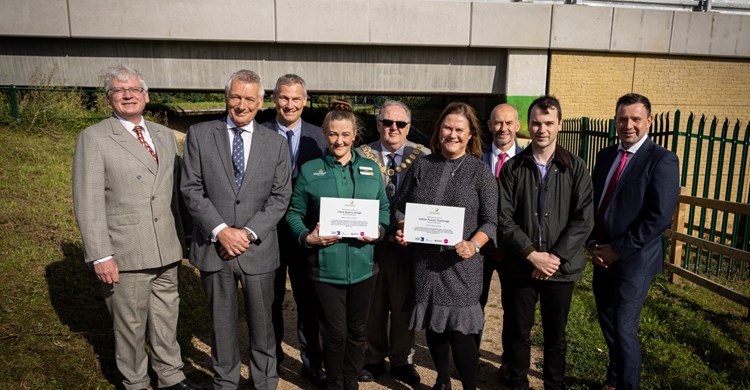 Adam Wood, Head of Infrastructure and Regeneration, Hertfordshire LEP, (second left) together with other dignitaries 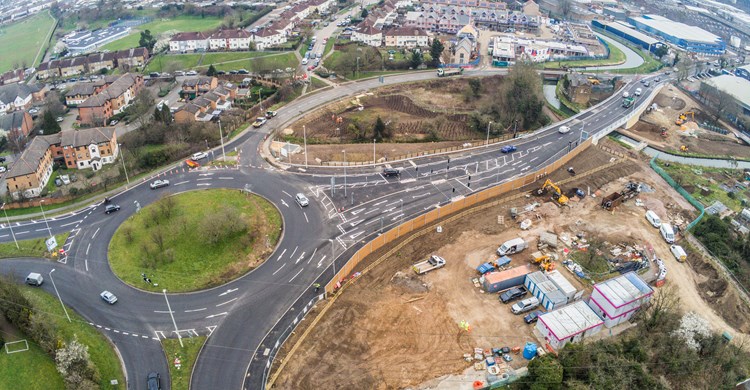 Aerial view of the bridge

The importance of partnership and collaboration on this project cannot be overstated. It needed substantial additional funding to bring the business case to life and I’m delighted that the Hertfordshire LEP were able to secure the vast majority of the funding, bringing the scheme to fruition. Most importantly, congratulations to our worthy winners Claire and Debbie.