Opportunity Hertfordshire- A spotlight on Film and TV

Delegates at Hertfordshire Local Enterprise’s Annual Conference –Spotlight on Film and TV - heard that the county was at the epicentre of the growth in the TV and film industry, and its rapid expansion could see the sector’s employment more than treble over the next decade.

The LEP’s Annual conference was broadcast live from Warner Bros. Studios Leavesden and brought together senior leaders and industry figures from Hertfordshire, Hollywood and beyond to identify how best to stimulate future investment, drive local job creation and spearhead skills development.

The conference aimed to put the spotlight firmly on the county’s film and TV sector which is fast becoming the new ‘Hollywood’, and is part of Hertfordshire LEP’s sector focus in its Economic Recovery Plan. The LEP recently commissioned an independent report into the value of the industry and is building an industry-led taskforce to develop an Action Plan which aims to capitalise on recent investment successes, helping to identify what will be needed to enable the industry to grow sustainably as well as leverage its economic, social and environmental value.

The debates focused not just on studio expansion, skills shortages and employment opportunities, but also on supporting the industry’s ‘long tail’ which includes supply chains, the wider business network and tourism potential. 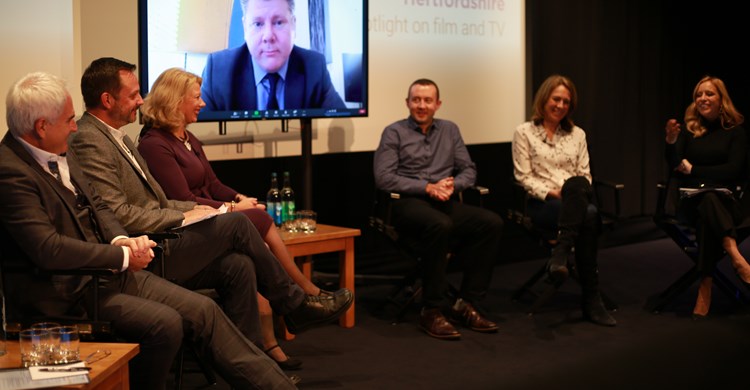 Jobs ‘boomtime’ in Hertfordshire as it becomes the ‘new Hollywood’

Up to 13,000 new jobs could be created in Hertfordshire’s booming film and TV sector, it was announced at Hertfordshire Local Enterprise’s Annual Conference –Spotlight on Film and TV.